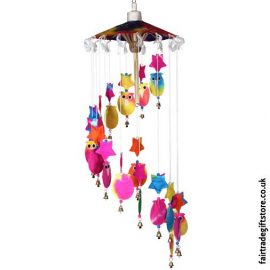 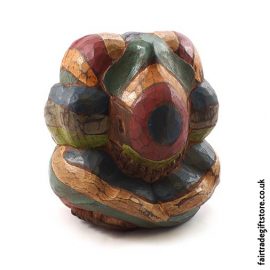 This fair trade wooden state has been hand carved in Indonesia from sustainable wood. Great skill is used to produce these statues, skills that are often handed down through the generations.

The origins of these statues are not 100% clear with three stories that are associated with the carvings. The idea we are told is you can pick the story that most fits how you feel the yogi is represented.

Story one:
This story suggest that the yogi is in fact Buddha who is bent over weeping for the troubles of mankind. Buddha is said to be absorbing the wrongs of mankind to make then easier for us to bare.

Story Two:
The second story is based on a tail involving two masked warriors.  These warriors spend years fighting each other on and off with no one warrior ever clearly winning. However during their last fight together the older warrior wins and so de-masks the other warrior to find out to his horror that he has been fighting his son the who time.  Stricken with grief at what he had done to his son, he collapsed onto the ground head in hands and wept for all eternity.

Story Three:
The third story is one based on the actual carving of the statue. It is said that apprentices are given the task of carving these yogi’s as a test. Once they can complete the carving perfectly they are then able to move on to other carvings.

You pick which story resonates best with you and go from there.

These statues are handmade and so may vary slightly.
This statue makes the perfect handmade fair trade gift.